Well, it's official; Tadpole and I have a new due date: January 7th. And just the fact that I managed to get the date changed reminds me why I love The Birth Center. My ultrasound said Jan. 7th, but most doctors wouldn't change a due date based on that, since it's only a 6 day difference from my earlier January 1st date. Fortunately, I have both very understanding midwives and additional evidence supporting a Jan. 7th due date. The midwives and I have determined that I ovulate on week 3, not week 2 like most women, supported by lots of evidence, including the fact that Lyndon was exactly a week "late". (Incidentally, I'm pretty sure he also measured a week behind on his early ultrasound, but nobody thought to change things around then. Now they know better.) 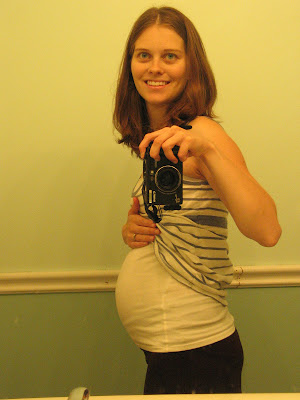 Isn't that bathroom lighting just glorious? Yeah, I know. It was the best I could do. 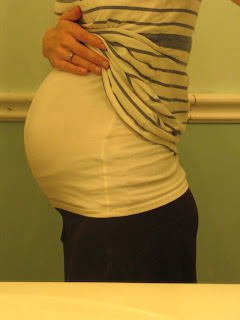 Close-up of the belly. I pretty much look pregnant now, instead of just fat, as long as I wear a shirt that fits closely, not one of those circus tent numbers.
Exciting news this week: I've started feeling little Tadpole move! Both the ultrasound tech and every midwife that's tried to find a heartbeat has commented on how much this little one has been moving, and I concur. It's not a strong enough feeling to stop me in my tracks just yet, but there are plenty of moments throughout the day, especially if I'm sitting down, when I can tell that Tadpole is all kinds of active in there. It's comforting to know he/she is alive and well, but it's a little scary to think about having a child that's that active. Then again, Lyndon was a mover, too, and he's turning out to be the best kid I could have wished for. So, no worries.
Two more weeks until our next ultrasound, when the all-important question will (should) be answered: boy or girl?

Posted by Adrian and Meredith at 10:05 PM