our staycation, part 2: the city

After our lovely day-long beach vacation, we went to visit some friends in the city. Adrian went camping with his former roommate and longtime friend, while Lyndon and I stayed with InDeeds and the baby. She keeps telling me how much there is to do in her city, but I didn't quite believe her until I experienced it for myself. Unfortunately, my camera died on the second day of our weekend adventure, so my pictures may leave something to be desired. 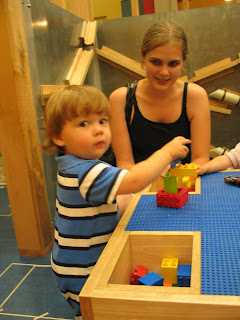 Lyndon had all kinds of fun playing with Legos and trains. We really need to get him some . . . 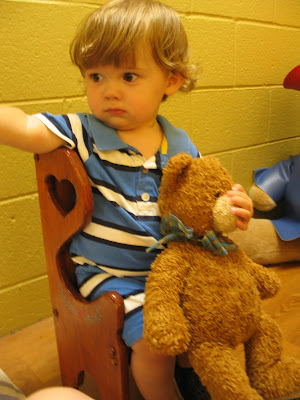 He also, despite the pouty face, loved sitting in this little chair. I'm pretty sure it was designed for stuffed animals, since it was a tight fit even for him, but he loved it. And no, that's not our teddy bear. That particular ratty (but endearing) toy belongs to Storyville. (Yes, I had to repress a shudder as I watched him snuggle his face into its germ-covered belly, but I could either test his immune system or break his heart. Guess which one I chose.) 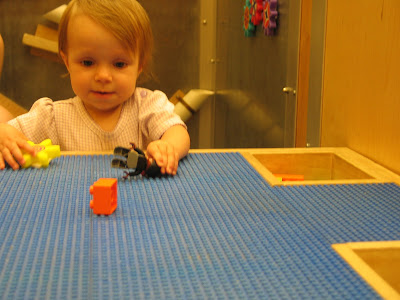 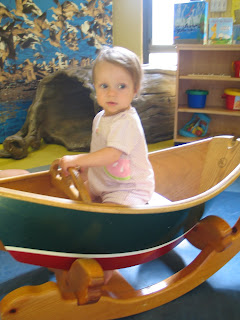 "Neither are awesome rocking boats!"
Then, we visited the duck pond. The ducks (especially the drakes) were apparently starving and not afraid to show it. We got attacked more than once, to the point where I had to beat one off with my shoe. (True story.) Between the vicious ducks and Lyndon's desire to leap into the pond, it was a busy trip. 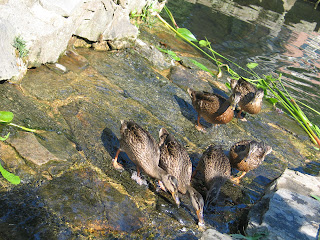 The females were a little less gung-ho. A little. 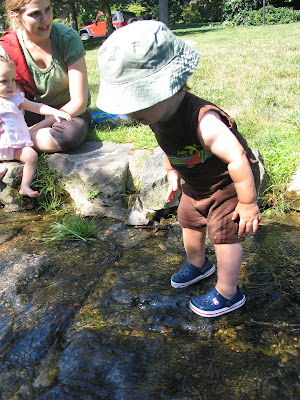 Lyndon, however, was plenty gung-ho. He splashed and stomped pretty much the whole time we were there. (Love those Crocs.) 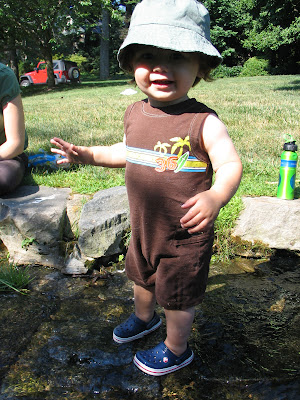 Oh, duck pond. How I wish we had one.
There was SO much to do in the city, so much to see. It was all free and open to the public-- unlike here, where the children's museum costs $12 per person and you have to put your name on a waiting list to attend library storytime-- and, as much as I don't want to live in the city, I have to admit, it has its advantages.
Posted by Adrian and Meredith at 10:55 PM

Yay for fun times in the city!!