this is seriously impressive

So, I came into the living room the other day while Lyndon was playing with his blocks, and this is what I found: 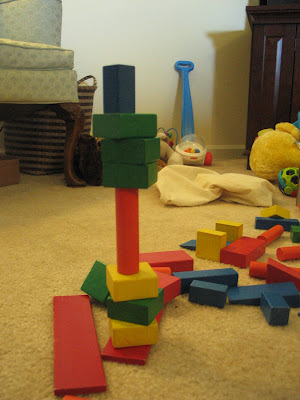 Yes, that is a nine block tower, incorporating two skinny blocks stood on their ends. Yes, he made it all by himself. I wasn't even in the room. No, I did not alter this picture.
I did, however, go look up the standard 18-month milestone for block-stacking. Sometime between 19 months and 2.5 years, the average child should be able to "make a tower of six cubes".
Um... yeah.
The next milestone is "make a tower of eight cubes", and it's not supposed to happen until sometime between 2 and 3.5 years.
Eep.
I know it's not a race; I know this doesn't necessarily even show extraordinary intelligence, just extraordinary small motor skills. But, man, it's hard not to feel super proud of your child after something like this. I wondered, though, if I was blowing it out of proportion. So I took some of Lyndon's other skills to the developmental chart. By 18-25 months, children should "know six body parts". I tested him last night, and he knows 14. Ehm.
This actually freaks me out a little. I've had people tell me that he's really smart before, but it's kind of scary to realize that my child will probably far outpace me in intelligence . . . probably by the time he's 5, at the rate he's going. I'm not surprised; Adrian is way smarter than I am, and Lyndon is just like him in so many ways. I'm just a little intimidated, especially when I think about maybe homeschooling this child. Yikes.
Posted by Adrian and Meredith at 8:54 PM

Dude! That is impressive!