Lyndon LOVES to help. He will do pretty much anything I ask if I tell him he's "helping". He has a few favorite chores, though-- mostly ones that involve taking things out and putting things in.

He loves helping me unload the dishwasher. Seriously. The kid once stopped eating his lunch because I started unloading the dishwasher and he couldn't stand NOT helping. 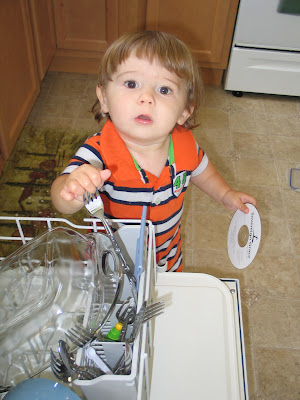 The silverware drawer is his favorite because he can easily pull out one. piece. at. a. time and hand them to me, (Don't worry; I take all the sharp knives out first.) but he's also started helping with the plates and bowls. Of course, I have to be on my toes for this, because if I don't take the plate from him fast enough, he will toss it on the floor. But that's only had to happen once, and I think not having to bend over for this task anymore is worth the risk.
He also has recently discovered the joy of fetching me things . . . 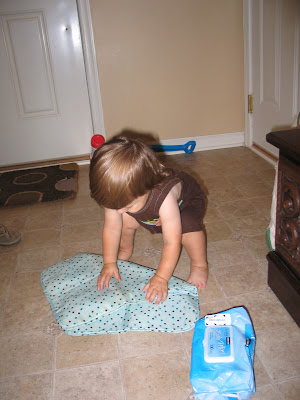 . . . like his changing pad and wipes. Funny story: he did this without me asking. I was prepping dinner, and I smelled something funny, so I told him that I would change him as soon as I finished up. He ran out of the kitchen, I assumed, to hide from the (usually) dreaded diaper change. However, a minute or two later, when I came into the living room, there he was, on his way into the kitchen, holding his changing pad and wipes. When he saw me, he carefully put the pad on the floor and laid down on top of it. And when I pronounced us "all done", he picked up the pad and wipes, and put them back in my bag by the front door.
Yes. It's true. I pretty much have the best child ever.
He also loves to help with the laundry (pictures forthcoming hopefully soon) and flushing the toilet after I dump out his diapers (don't ever expect pictures of that).
Are all toddlers this helpful, or is it just mine?
Posted by Adrian and Meredith at 9:51 PM

So cute! It's got to be something about the age, cause Emma started doing the same things...it's sways good when you don't have to give directions like "to your left" and "right behind you"