When we get sick, we do it up right!

Please excuse the blog silence. In the last two weeks, we have had three cases of the flu and a double ear infection around here. Yes friends, at 14 months old, Lyndon finally got his first (and I guess second) ear infection! Our dr. was mostly just surprised that it took him this long to have one. And I of course went home and called the grandparents. It's almost like a milestone . . . first tooth . . . first word . . . first ear infection.

Anyway, we seem to be climbing out from under all the sickness now, and I'm hoping that maybe, just maybe, the "winter of plagues" is over.

In other news, Lyndon is definitely turning into a toddler. He rarely crawls anymore and actually tried running the other day. Of course, he immediately fell down on his cute little bum, but he picked himself up and tried again. I find myself marveling at the persistence of a one year-old. He is willing to fall down literally hundreds of times a day and just patiently pick himself up and start over. It's rather inspiring.

He also has a whole bunch of teeth now. I applaud my friend for managing to get a decent picture of the inside of her daughter's mouth as proof of incoming teeth, but it's just not gonna happen over here. Dude freaks out anytime we try to do anything to the inside of his mouth. However, perhaps I can catch him laughing at some point and show you. Because the kid's getting some crazy molars.

He's also mastered some sign language. I, of course, was worried about his language skills, since he isn't a fan of babbling and really doesn't say any words consistently. (Yes, we did hear a few a while ago, but the only one we've heard since is "Daddy," and he's only said it two or three times.) But, clearly, he's ready to communicate, having learned the signs for "more", "please", "eat", "milk", "all done" and "help" in only two days. He has picked up on the babbling a bit since learning these signs; we're hoping they're helping him grasp the concept of conversation.

I made chocolate chip cookies the other day, and he was a big fan. Can you tell? 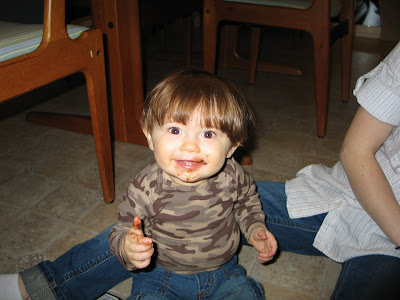 Posted by Adrian and Meredith at 2:17 PM

Haha, you should see all the bad pictures I took while trying to get that one good shot of her tooth!

But anyway, sorry to hear you all have been so sick!