We epic fail at Halloween pictures.

I apologize for not following through on my promise of a "coherent thoughts on Halloween and pics of my adorable son in costume" post. It's a long story, involving a borrowed SLR and an accidentally erased memory card. Hopefully, we haven't lost all pics of this year's Halloween forever; although, as my instructional technologist husband hasn't managed to recover them in 3 days of trying, it's not looking good.

So I have decided to post the "coherent thoughts on Halloween" portion anyway, which I wrote on Tuesday, and follow it with "pics of my adorable son in (part of his) costume". And if we ever manage to get our pics back, you will be the first ones I share them with. Promise.

First off, a little error correction. The article cited yesterday is by Justin Holcomb, not Mark Driscoll. Mark simply posted it on his Facebook status.

Anyway, in his article, Justin says:

"It seems that Christians can easily receive (with wisdom) some cultural aspects of the holiday, and there is some potential for the pagan cultural practices to be redeemed—but care must be taken. There is a big difference between kids dressing up in cute costumes for candy and Mardi-Gras-like Halloween parties, offensive costumes, and uninhibited excess . . . for those Christians whose conscience permits we should view it as an opportunity to engage wisely with our culture."

And since our household is generally not tempted towards "uninhibited excess," and invitations to "Mardi-Gras-like parties" are few and far between, we feel it fairly safe, as a family, to participate in some aspects of Halloween. We are attempting to "redeem" the holiday, to use Justin's word.

For example, Lyndon and I went to three events last week that were basically an excuse for kids to wear costumes, play games and see their friends. One was hosted by our church and was a fantastic time for our church family to make some memories together. One was a MOMS Club annual event, at which I made new mom friends and Lyndon tackled the playground with some of his. And one was our local, downtown Trick or Treat night, a great chance to support local businesses and do something unusual as a family.

Oh, and then we went Trick or Treating with friends last night, and Lyndon still giggles with excitement when we talk about it. Holiday effectively redeemed. :-) 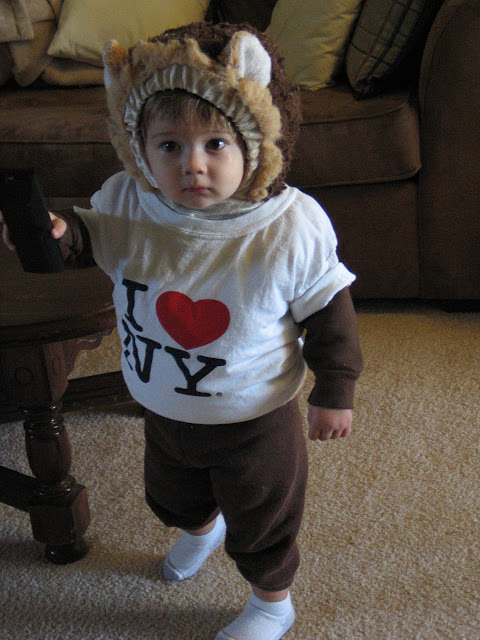 Yes, this is technically his entire costume (except shoes), but I think the misery on his face counts against it. This was the first time I tried putting him in it, and he hated it. Hated it so much, in fact, that I gave up and took most of it off . . . 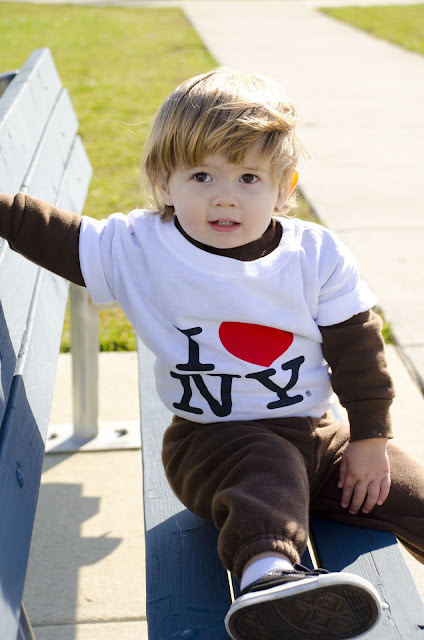 See? Much happier. But much less cute. In theory, he was Alex the Lion from "Madagascar". At this particular party, he just carried his stuffed lion around and wore his t-shirt. I did manage to make the whole costume more comfortable for him by cutting the hood and tail off of the original fuzzy vest and attaching them to his sweatsuit. By the end of Halloween night, he didn't want to take it off. Unfortunately, that's the part of the camera card we lost. *sigh* At least you get the idea. Posted by Adrian and Meredith at 2:03 PM