Soon after Lyndon was born, I announced that he was going to be Harry Potter for Halloween, as he had a head full of untidy black hair and would only need some blue pajamas and maybe a painted-on scar. As the holiday approached, however, his hair began to lighten. It's now a soft, light brown, and he doesn't look like Harry at all. *sigh*

That meant I actually had to come up with a creative, cheap, easy, comfortable costume for a crawling 9 month-old. Um, yeah.

It came to me one night when I was asking my husband, yet again, if he had any ideas. I said something along the lines of, "He army crawls everywhere, so he has to really be able to move in his costume; otherwise, either he'll be miserable or it'll be ruined." Wait... he army crawls? Ah ha! 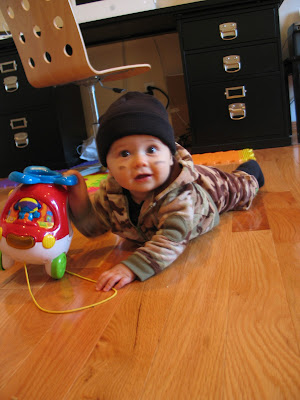 That's right. I dressed him in camo (most of which he already had), bought a hat, borrowed some socks, and painted his cheeks. Army ranger, anyone?
Some action shots: 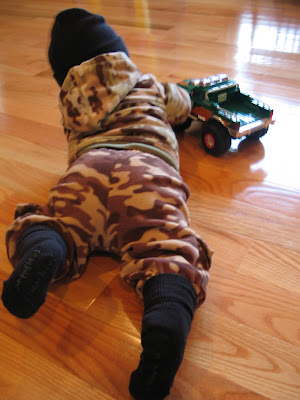 He went after a really manly monster truck, which was perfect. 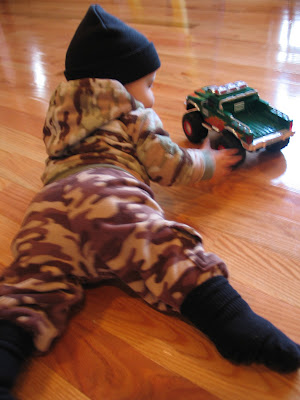 I think he kind of looks like a cat in this one. 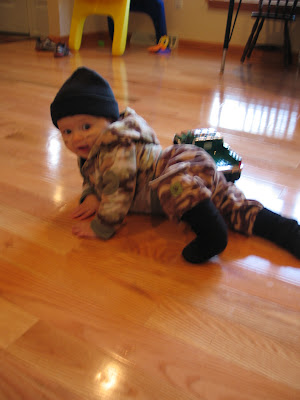 Lyndon had a lovely first Halloween.
Posted by Adrian and Meredith at 8:02 PM