Well, I'm finally posting about the Marriage Conference . . . and now some of the details are a little foggy, so bear with me as I reminisce . . .

We got lost on our way up, to the tune of about an hour's extra travel time. Part of it was Google's fault, and part of it was human error. Adrian felt terrible about it . . . but we still arrived 1 1/2 hours before the first session started, with enough time to check in (free chocolate bars!) , get our stuff together, and grab dinner. ($9.00 panini sandwiches in the hotel's coffee shop; I wish I could say that that was the last time we ate there.) 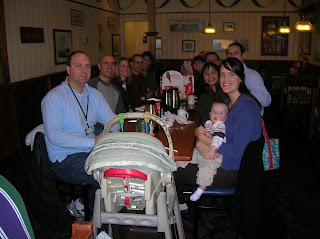 It was a great time, so I really couldn't have asked for more, and Adrian handled the last-minute change of his best-laid plans like a pro.

As a matter of fact, meals like this were probably my favorite part of the conference. Yes, the messages were amazing, and getting away for a weekend was great, but it was so wonderful to be able to hang out with all these couples without the constant interruption of children. After the last session on Saturday night, a bunch of us went to the hotel's sports bar and talked until midnight. I feel as if Adrian and I benefited as much from our interaction with all the wise, godly couples around us as we did from the messages.

On the way home, as we were remarking about how great it would be to live on a farm in the Pennsylvania countryside, we saw this: 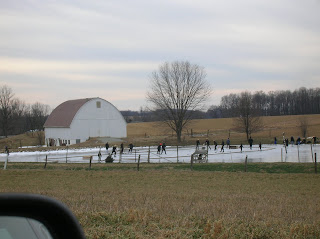 Can you tell what's going on here? Let me give you another view: 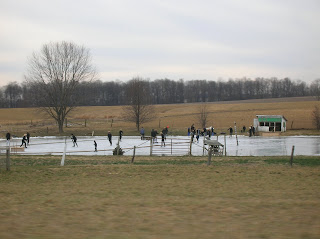 Yes, this is a crowd of Amish boys skating on a frozen pond, a homey and quaint little scene. But look closer . . . these Amish people are playing hockey. They've set up goals, and they have pucks and sticks. It just made us want to live in the country more. *sigh*
Posted by Adrian and Meredith at 3:12 PM

Typo in that last comment. Re-do: Haha, so, not only to the Amish Water Ski, they also play ice hockey. Who knew. :-)

We had a fabulous time with you guys and I must say that Adrian took it very well! :) Even though we didn't end up going to his restaurant, Dave and I still appreciated all of his hard work and effort! Adrian - your reward is in heaven! (and thanks again for the free appetizer!)