Well, "tomorrow" didn't come as soon as I had planned . . . but I finally have a few moments to take some pictures and update you all on my work-less week. First, in my feeble attempt to live as the farmgirl I really am (even in suburbia), I planted a whole re-purposed egg carton's worth of seeds. 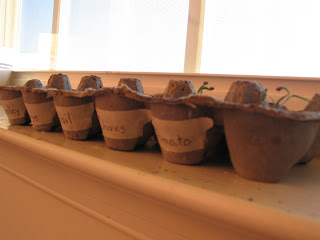 There's tomatoes, chives, basil, sage, and parsley-- everything that's cheaper to grow than buy, that I can use in bulk, and that I can put in a reasonable-sized container, as our neighborhood doesn't allow actual gardens. :-( The tomatoes are clearly coming up; they're about 2 1/2 inches tall right now! 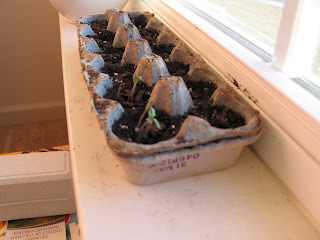 This one gives a better view of the emerging sprouts. Along with the tomatoes, I've also got a bit of basil that you can just see poking out of the soil and a tiny little parsley sprout that you'll just have to take my word for, as my camera wouldn't focus on something that close-up. Also, I planted an old packet of wildflower seeds, just for fun, as I didn't really think they would sprout. They now look like this: 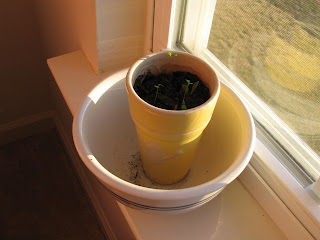 I'm not sure what I'll do with them, as I know I'm allowed to plant them straight into the ground, as they're not edible, but I don't know if I should, as I don't know which flowers they are. Maybe I'll decide once they show me their identities.